DgmlBuilder is a small DotNet library for generating DGML graphs without having to know all the details of DGML (the Microsoft Directed Graph Markup Language). Visual Studio contains a powerful, interactive DGML viewer that is used mostly for displaying code structures of your Visual Studio projects. Despite the powerful viewer, the DGML format is not so much in use for other purposes. It is also a bit difficult to use. The aim of DgmlBuilder is to make it more easy to represent your (graph-) structured data in DGML such that you can use the Visual Studio DGML viewer to display, analyze, and interact with your data.

Below are a few example pictures. 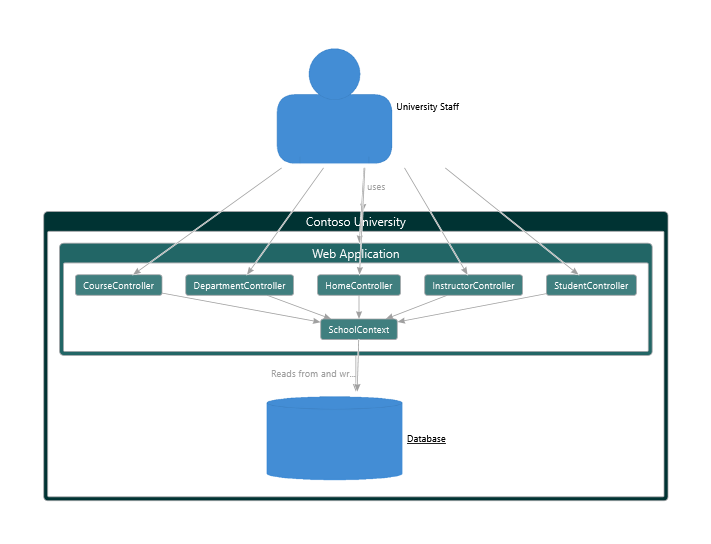 DgmlBuilder operates on a collection of objects and turns these into collections of nodes, edges, styles, and categories, based on a given set of builders.

Builders are specific classes that you write to convert objects in your model to specific graph elements.

The following builders are supported:

If a link denotes a containment relation, set the attribute IsContainment to true. DgmlBuilder will use this information to place the target node as child of the source node.

Each builder has an optional accept parameter that can be used to specify when the builder should be applied to an element. For example, in case of the aforementioned node builder, we could add an accept parameter as follows:

In this example, the property IsPublic of a component is used to specify that the builder should only be applied to public components.

To use DgmlBuilder, you instantiate DgmlBuilder with the builders you need. The basic setup is like this:

As you can see, all builder properties of DgmlBuilder are collections, allowing you to specify multiple builders for each.

Both build methods will apply the configured builders to all elements and produces a DGML graph as output.

For example, if you have your components, interfaces, and calls contained in separate collections, you can generate the corresponding DGML graph as follows:

The resulting DGML graph is a serializable object. This means that with the standard .NET serializers you can save the corresponding graph to disk. E.g., as follows:

There is also a convenient method available that does exactly this:

You can now open the file my-graph.dgml in the DGML viewer of Visual Studio to inspect and analyze the graph.

The graphs produced by DgmlBuilder so far are pretty straight-forward graphs with nodes and edges. However, more powerful graphs can be generated by having DgmlBuilder execute graph analyses. These graph analyses can be passed as constructor arguments to DgmlBuilder. The DgmlBuilder library contains three pre-defined analyses:

To use any of these or your own analyses, pass them to the constructor of DgmlBuilder. E.g.,

To create your own analysis, create a class that implements IGraphAnalysis. This interface has the following three methods:

Below we discuss these methods in more detail.

It receives a DGML graph as input. The analysis method typically decorates this graph with additional attributes. The DGML model as defined in DgmlBuilder supports adding your custom properties to edges and nodes. These will be converted to XML attributes during serialization. To add a custom property with name foo and value bar to a node n you can use the following code:

To use such newly created properties in DGML (e.g., by referencing them in styles), you first have to register the property in DGML (see below). As an example, the analysis action of NodeReferencedAnalysis is defined as follows:

It iterates over each node in the graph and adds the property IsReferenced. Note that containment links are ignored.

The Execute method is calle before the other two methods. This is to enable that list of properties and styles can be dependent on the result of the analysis.

Your analysis typically decorates the graph with properties which are not present in DGML. With Properties, you can declare such additional properties to DGML:

For example, NodeReferencedAnalysis adds a boolean to mark a node as referenced. To that end, the following property is declared:

This declares the property IsReferenced of type System.Boolean. Since GetProperties is called after Execute, the generated list of properties can be dependent on the outcome of the analysis action.

Adding styles for your analysis

Your analysis will typically not only decorate the graph with computed properties, but also add styles to the graph to give some visual appearance of the analysis. With the GetStyles method any additional styles can be added:

This style adds an icon to nodes for which the property IsReferenced equals false. Since GetStyles is called after Execute, the generated list of properties can be dependent on the outcome of the analysis action.

More information about creating custom (conditional) styles can be found at https://docs.microsoft.com/en-us/visualstudio/modeling/customize-code-maps-by-editing-the-dgml-files.

The GitHub repository of DgmlBuilder contains TypesVisualizer, which is a small tool to capture the structure and relationships of collections of types in a DGML graph. This tool demonstrates most features of DgmlBuilder.

Showing the top 1 NuGet packages that depend on OpenSoftware.DgmlBuilder:

Showing the top 1 popular GitHub repositories that depend on OpenSoftware.DgmlBuilder: